If we use the US Dollar Index for Forex trading, we can try to determine which way the USD is going.

And from there, can it give us a better idea of how to trade USD pairs?

It would sure be nice to know this, huh?

Episode 58’s question is from Ahmad

“How do you use the DXY to find better ways to trade US dollar pairs?”

Ahmad from Iran (city not mentioned)

So What Is This Thing Exactly?

And what’s cool about it, is how you can chart this index like you would any other currency pair or major index on your own charting platform.

Many MT4’s have it, but some still don’t.  If yours does not, there are plenty of other places to go look at it.

Barchart.com, as they often do, has a good example here.

Now if you are somehow able to chart this index like you chart your other currency pairs, you will have a better idea than most as to which way the USD is expected to move.

This can be extremely useful information when it comes to how you trade the rest of your USD currency pairs.

Let’s make sure we take a few more things into consideration here.

How The Sausage Is Made

I would love to have a Dollar Index which take the other 7 major currencies (because we trade every combination of the 8 here at No Nonsense Forex) and treat them equally amongst each other.

Unfortunately, this is not the case.  It’s heavily weighted into some of the more commonly traded currencies, and doesn’t even take the Oceanic currencies (AUD and NZD) into account!

Here are the weights:

Source is from Wikipedia

So again, currencies like the AUD, NZD, and CNY (if you trade it) run pretty independently of the currencies listed above.

The USDX is not much help at all if you’re trading any of those against the USD.

And with those percentages, it doesn’t do a lot of good when trading any of the others.

Look, I’m sure they had a perfectly good reason for doing it this way, but if you are trying to gain an edge from a technical analysis standpoint, these weights aren’t doing us any favors.

Plus, I’ve Already Tried It

As usual, my results compared to yours can vary greatly.  However….

Back when I had FXCM (and Oanda would let Americans do it), I had the USDX up on my charts all the time.

If I received a long signal on my algorithm on the USDX, then as a rule, I would only take USD trades that were dollar-bullish.

And of course, vice-versa when I had a short signal.

I thought this would give me a tremendous advantage going forward.

What did it end up doing instead?

It kept me out of a lot of winning trades.

I’ve said it before, I can handle losses with the best of them.  I do NOT do well with carelessly-missed opportunities.

Losses are a part of the game.

But there are no excuses for missed winners.

Therefore I had to take the USDX out of my trading completely.  And I was better off for it.

All I Want For Christmas

Wouldn’t be nice if we had something like this……..

2) And why on Earth would you just stop there?  Also give us an evenly-weighted index for EUR, GBP, CHF, CAD, JPY AUD, and NZD as well.

I think we could do some damage with something like this, don’t you?

I would much rather have something in chart form like the USDX is now, but improved like I mentioned above, because then I could put my own algorithm on it and really attempt to see which currencies were getting ready to trend up and down. 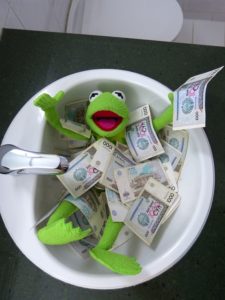 Actual photo of me if I had something like this

I can’t believe with all the capabilities we have with programming and such, how something like this doesn’t already exist.

I’ll bet you there are hedge funds out there who have something similar.

Note to those hedge funds — Call Me.

Edit: I’ve had a large handful of programmers send in some possibilities here.  Stay tuned!  I’m going to try and put some up this weekend.

But man, from where I stood, the US Dollar Index did NOT do what I was hoping it would do.

If my experience here helps your trading in any way….