I never thought, in my wildest dreams (I dream of currencies) the Russian Ruble would ever take center stage.

But here we are.

Despite my name, I am not Vladamir Putin, nor do I like him.

I do however, have an appreciation for strategy, especially on a global stage, and you have to respect what he’s done.

Moves that had seemed clumsy to 99% of the world’s media and intelligence community (two COMPLETELY different things), now may look like they had a long-game purpose this entire time.

That, or they were actually quite clumsy, and we have yet to see the true after-effects.

Either way, years ago I felt the balance of power slowly shifting east, and I wanted part in major eastern currencies as part of a “it will probably be fine, but if my USD completely shits itself” defensive diversification portfolio.  It included currencies like the RUB, CNY, and SGD.

It seemed eccentric.  It seemed flat out unnecessary.  But it wouldn’t have been the first time I’d heard that.

I talk about all of it here.

Russia and China were both hoarding resources like gold and oil, amongst many other things people don’t even think about, like fertilizer components and Vitamin C.

I had a strong feeling this would become important someday.

And again, here we are.

Nobody Expected the Spanish Inquisition!

Most of us didn’t expect Russia to actually go in and start a hot war with Ukraine.

We expected the usual.

And voila!  Russia’s hostile expansion gets a little big bigger, but not big enough for anyone to care after a month or so.

But this was never Putin’s intent.  If you remember Peter Zeihan’s interview with Real Vision from this past blog post, Peter’s take was that Putin was in it for the “whole enchilada”, which included Estonia, Latvia, Lithuania, Poland, Romania, and Finland.  At least.  And this was truly his last stand.

Due to this “unexpected” (by us mortals at least) invasion, a lot of things in the financial world changed in the span of about a week.  Crazy sanctions came down, even more than Putin expected (or was it?).  All whilst Europe was in an impending energy squeeze.

But what the sanctions did do was ruin Russia’s economy, for good, or at least again so we thought.  Truth be told, Russia’s economy may never be the same again.  The Ruble took a massive spill. 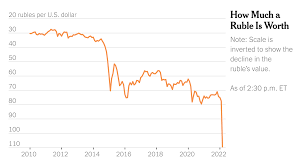 Through 2% skill and 98% luck, I dumped half of my Rubles right before the big plunge.

Trying not to be reactive, this is a long term hedge, but I will be swapping half of my RUB for more SGD, and keeping the other half. I can always swap it back when it's time.

“Why bother even keeping the other half?” the followers thought.  “It’s over”.

With Putin, love him or hate him, it’s never over.  Especially when he has had time to plan this whole thing out for a very long time.

This could have been in the cards the whole time for all we know.

The Board Shifts A Bit

Flash forward one month, and moves have been made.

Putin now requires all Russian nat gas to be paid for in Rubles.  If you don’t have Rubles, a] Too bad, or b]……..

You can pay in gold.

What I am about to post is not 100% set in stone, there is some debate over this.  But in the video I posted above, did I not (kinda) call this?

Holy hell, they did it.

This is a really big deal, the financial equivalent of nuclear bombs. Most worlds economies are all based on debt. Now Russias money is based on money. pic.twitter.com/v1MtyT9Utw

I thought either Russia, China, or both would eventually do this.  After all, they were stockpiling gold at a massive rate.

(At least that’s what was “reported”.  Russia and China never report anything properly or correctly, because fuck you, that’s why)

And this is one way you win a war without firing a shot at your enemy.

Tie your money to something real, while your competition flounders with a slowly (and maybe some day rapidly) devaluating currency.

The Ruble has not recovered all of its losses since the sanctions hit, but it’s uh, headed in the right direction pretty quick I’d say. 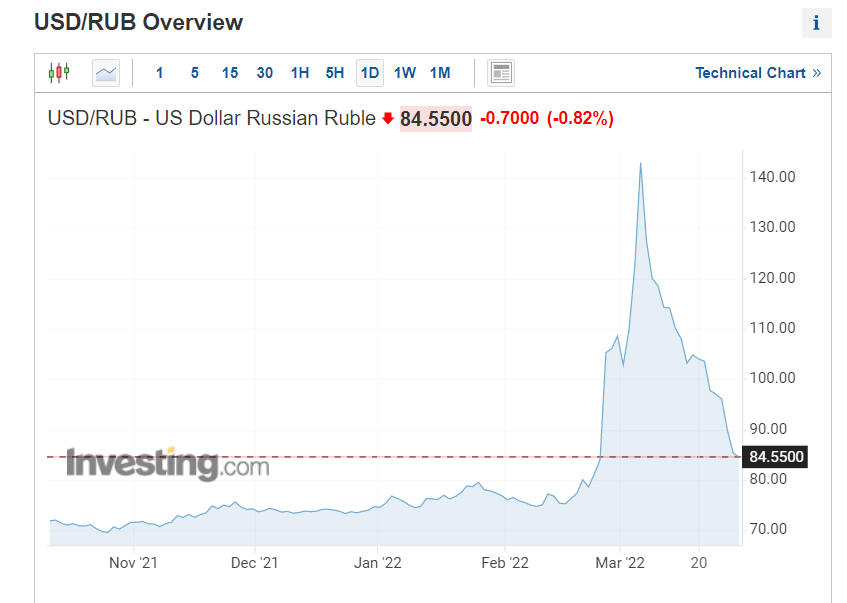 I have people in my Discord forum right now pondering the idea of stacking Rubles for the long term.

Peter Zeihan still does not think this is a good idea.

The #ruble has regained much lost ground to the USD. The reason? The Russian Central Bank now requires ALL Russian firms to convert ALL of their hard currency export earnings into rubles. Russian exports are collapsing, but what's left is artificially propping up the ruble.
1/ pic.twitter.com/tmRlEmu7l1

He admits he’s not a finance guy, but in this case he says it doesn’t matter.  Russia’s economy is FUBAR.

I’m on board with this.  I think it’s too soon to see all of the knock-on effects this war and these sanctions will have, though lots of people are trying to call the game early in the first half.

But I’m still keeping the Rubles I have left.  Apart from USD, this put the majority of my foreign currency holdings in:

And soon to be one more.