If an NFT market crash happened, what would you do?

NFTs are a more emotional investment than crypto coins and tokens are, by and large.

Which means this whole thing could be a lot easier to predict.

We already know what an NFT boom cycle looks like.

And this isn’t it.

As I write this on the 22nd of March, 2022, the market is very top heavy.  The big time NFTs, the ones nobody can afford are still getting lots of press.

The lesser ones are still a big deal, but only to the hard-cores.  You can see the fall off here.

Courtesy of nonfungible.com and highcharts.com

On a more micro level, we have had a resurgence in some of the native NFTs of other chains in the past few months.  Even though this did not have a large effect on the broader market, even those are dropping in popularity now.

CNFTs from Cardano for instance.

You can argue there’s a mild correlation between ADA volume and NFT sales, but going forward, I don’t think a lot of it is going to matter.

Especially when the majority of people start to sell everything.

NFTs to me are the definition of a luxury purchase.

I know there are flippers to flip NFTs to put food on the table, we’re not talking about them.

With the world going the direction it’s going, I think we are going to see society in a place most of us have never seen before.

Not only are there expected to be food crises, but an everything crisis going on at the same time.  Food, energy, shipping, metals, all of it.  Not to mention the possibility of a prolonged war, and all of the fun after-effects of it.

Luxury purchases in general could very well be put on hold for a long time.  Years possibly.  Not for the rich of course, but for everyone else.

When it’s a matter of buying an NFT or being able to eat or afford rent or put gas in the car, I know which people are going to choose.

This situation may sound crazy, but are we not ALREADY seeing it?

Much of the world has had it far too good for far too long.  Most people in the developed world have not been forced to make the choice of spending their extra money on food, shelter, or electricity/gas.

But I fear it’s coming.  I don’t think most people understand how good we’ve had it.  The 2010’s were a dream for global prosperity.

The chart below is of the S&P 500 over the past 10 years, with the only “recession” (shortest recession in history) shaded in grey. 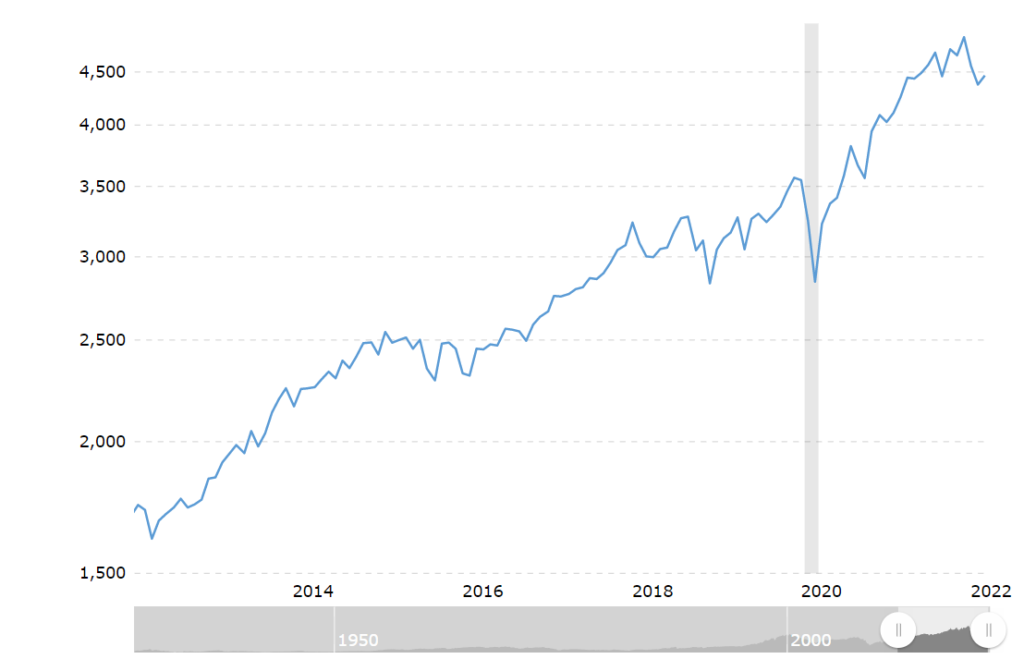 10 year charts don’t ever look like this.  Yet this is where we have been.

On top of it all, since 2016, central banks have done nothing but lower interest rates all the way down to at/near/below zero.  This takes people out of cash, and creates risk-on markets which free them up to take risks they normally wouldn’t take.

Risks such as NFTs and crypto in general, which is still far too volatile to be considered “not risky” despite our love for it, and belief that it’s the future of everything.

We are already moving away from that.  Despite world events, and despite the market falling, we are now in the process of raising rates again.

It’s all coming together at the same time.  The high times are over.

I was talking about all of this on a Twitter Spaces earlier in the week, and got some pushback from the NFT community, which I expected.

One of the points made was that if you really love the project, you should keep and hold long term.

I don’t disagree.  I’m an advocate of a buy-and-hold strategy to any investment.  Just be ready for many of your artwork NFTs to fall in price.  A lot.

As we mentioned at the top of the article, this is going to hurt, because of the swirl of emotional ties people have to these things, coupled with the rise in value many of them have had.

I also need to mention this now while many of you are already seething at me — a lot of the NFTs you love and cherish so dearly, were nothing more than money grabs.

Seriously guys, there are like 130 monkey art projects out there, do you really think there were NOT scores of creators out there simply cashing in on the opportunity?

Some were great projects, with great stories and even real utility.  But please understand, many of these creators were watching what was happening, and thinking to themselves “Jesus Christ, these people will buy ANYTHING“.  They weren’t wrong.

Disagree all you like, but I see much of this playing out in the coming months and years, if it hasn’t already.

You may think the majority of these creators have high hopes and a real vision for the future with these projects.  But when the overall enthusiasm wanes, and they’re not making anymore money, don’t be completely shocked when they move onto other things.

I’ve been wrong before, but as we’ve seen in the charts above, and as we’ve seen what happens to spending habits in a crisis, history and numbers are on my side.

This Is Not A Bad Thing

When you are a true OG buy-and-holder, you not only look forward to bear markets, you celebrate them.

Everything is cyclical.  An NFT market crash is to be expected.

The recent drop in the crypto market for example, has given me tremendous opportunity to double up on several positions I’m still very bullish on, not to mention given me the chance to enter projects that passed me buy before.

I want you to take the same approach.

When markets crash, you are able to settle down, remove some emotion form the equation, and take a much more zoomed out view (which is the view you should always take, but let’s be honest).

You can now much better determine which projects actually have staying power going forward.

And you can start scooping them up at rock bottom prices.

Tell me again why this is a bad thing?

You may just have to change your focus, and your overall approach to these things.

And you may have to learn to let go.

No problems without solutions here.

If you agree with anything I’ve said, or you simply think there’s a chance I could be right, you may want to consider getting liquid right now and selling some of your NFTs you are the least bullish on.

Keep in mind, this pertains mainly to artwork.  All my NFTs for example, are metaverse land parcels,  or pieces to a future game.  I bought those for the very long term, and am not letting them go for that reason.  I do not care one bit what the price is now, or months from now.  And I will be dead wrong on a number of them.

But you are probably more emotionally attached to these things, which is difficult.  You have also seem them go up (and then down) in price, so you think you “know what the potential could be” for these things, and it keeps you hanging on longer than you want to.

And you may even be right.  During an NFT Winter, a small handful of projects will still moon.

But we’re talking a small handful out of tens of thousands here.  Terrible odds.

This will not be the only wave of NFTs that will catch your eye.  Don’t you have to have liquidity (cash) ready to deploy when the next round comes?

Or do you want to be stuck holding a bunch of dead projects while the founders are busy crafting their next money grab?

We could also see a recovery in the crypto market sooner than later.  Don’t you want to partake in that to the fullest?

Look, if you already have lots of money and crypto, then hold them all for all I care.  But if you’re not, I would ask that you start turning your emotional mind off, and your strategic mind on.