I have never been the type to seek out advice from others.  Nobody else I knew was really anything like me, so it was hard to value their perspective on things.

But the one time I did ask, I got the gem I’m going to share with you below.

I have a great dad, but he is not the type of Dad who is constantly dropping nuggets of wisdom.  Not his style.

And like I said above, I never knew many, if any people with the same skillset and life goals that I had.

So why ask their advice?  What good would it do?

The longer I waited tables, the more unsolicited advice I would get from people I didn’t respect, telling me I should go into management or go back to school(!).  Fuck those people.

Couple this with the fact that in my 20s I was cocky and already thought I knew everything (how things don’t change), so seeking advice was just never a thing for me.

So there I was, playing 5-10 limit Hold-Em at Green Valley Ranch, a suburban hotel resort in Henderson NV, the main suburb of Vegas.

I did this to pay bills for 3 months as I was waiting for my new job to open back in 2006 (it was a brand new restaurant that was behind schedule).

When you play every day, you tend to see a lot of the same people over time, for better or for worse.  One of my least favorite things about poker was the captive audience, and being stuck there with socially awkward people you would normally just walk away from. 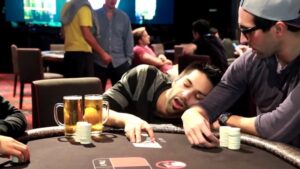 More common than it should be

So when you do find people you actually jibe with, you treat them like gold, for they’re the only thing that gets you through your day.

Most of the cool people talk less, so it takes awhile to establish any kind of relationship, but there was this 45-50 year old tubby guy from Florida who I got on with really well.

We were to the point where we could even take subtle digs at the wackadoos at the table without them noticing.  And if they did notice, we had each other’s back.

On a slower day, so slow we had problems filling the table that afternoon, I asked him what he did.

He owned one of the largest pool companies in Florida/Georgia.  Holy shit!

I was surprised.  I asked why he only played 5-10 limit.  Not very stimulating to a guy with that kind of money.

“It relaxes me” he said.  “I shut my phone off and just play for awhile”.

He spends half the year at his Vegas home.  No wife, several girlfriends.

I knew I liked this guy.

His name was Roy.

Roy bought a cabana at the hotel pool one Saturday, and asked if I wanted to come by after I was done playing.

I had to go home and get trunks and all, but I said I’d be there.

Now this was Green Valley Ranch, not MGM.  This wasn’t a blowout bash, but I had never been to a Vegas pool cabana before.

Super nice, great vibe, and some really good people at the cabana.  Not sure why I expected anything different.

We drank all night, like the good, slow sustained kind.  It got a bit chilly after the sun went down, so we stopped swimming and ordered food.

That’s when I broke character and asked,

“Ay Roy.  If you were to give somebody one piece of advice, what would it be?”

I did not see his answer coming.

I asked for clarification, and I can’t quote verbatim, but it went something like this:

There have been millions of people, with boatload of potential and ambition (rare combo), that made one huge mistake, and now it’s over.  In Vegas it’s more pronounced.  Addiction, knocking up the wrong girl, running with the wrong group, that one fight you should have never gotten into and now there’s knives or guns involved, a large purchase you can’t afford, one bad car accident, etc.

“If you can avoid that, the rest is up to you”, Roy said as he finished his crab cakes.

I Still Fucked Up

I bought a condo in Las Vegas in 2007, two months before the crash.

I bought it based on the $400-$500 a day I was making at the hottest restaurant in town (the one I was waiting for), not realizing that the industry is extremely cyclical and things change all the time.

I was underwater from day one.  Years and years of making good money, but never having any to spend.

Luckily I had some real estate friends, and they showed me how to short sale.

I didn’t want to do it because I thought it was a bitch move, but there was little other choice at the time.

It took 5 years, but it went through.

But if that exit wasn’t there, I would have had to take more drastic measures, such as bankruptcy or foreclosure, which often excludes you from trading and investing on certain platforms.  What would my life be like then?

And some of these things simply don’t have exits.  Really REALLY avoid those.

I know there are some of you out there who have made big mistakes too, and are trying to work your way out of them (I hope so at least).

But so many people will never recover.  It’s basically over.

By simply avoiding the things that take good men down, you have an advantage.

Winning by not losing.

Even with your finances, take inventory of what can go wrong, and what could really take you down.

Are you leveraged anywhere?

Do you only have one bank?

Is most of your money digital?

And MAKE THIS NOT THE CASE ANYMORE.

I’m telling you, keeping your head above water during this time is going to be how you end up on the right side of the great wealth transfer.

Can’t do that if you’ve already drowned.

Roy had a kid (on purpose) the next year and stopped coming to Vegas.  We lost touch.