I have discovered most people’s favorite thing in the whole world.

Do you want a business that’s bound to fall hard at some point?

Just get ready to recognize where the top is, and sell there.  Because it can be a long way down.

Do you want a business that’s resilient to any type of downfall?

Create something that benefits lazy people.

Make something that keeps people sedentary.

Then later make something that keeps these people propped up and alive, at least for another year.

You’re not guaranteed to win, but it will be hard to lose.

What are some of the things I’m talking about?

And if you want to get dark, you can go another level deeper

Because these things will never fall out of fashion.  They’re built for people who on any given day, choose to do nothing.

People on Twitter get all bent out of shape when they see fat models on billboards and magazines.

If you understand marketing, even a little, you can’t be mad at it.  You need to market to the most amount of people.  And that’s what most people look like now!  The outrage is misplaced.

This is yet another bull case for the Metaverse IMO.  Monetary rewards for being sloth-like?  Who could resist!

Many of these people do have jobs, and may actually be good at them, but once they leave that structure (the structure that somebody more successful than them set up for them to follow like a good little monkey), it’s ten hours of YouTube and a Family Size bag of Doritos.

Yes, I’m talking about an old roommate of mine.

Were people always this way though?  Hard to say.  Possibly.

There’s just a lot more fun stuff to do these days that involves being stationary, I’ll give you that.  And thanks to high-carb diets and GMO’s, people’s gut health is all out of whack, making them lethargic and unhappy to boot.

And don’t even get me started on all of the unnecessary meds people are on.

It all swirls into one.  It sucks.  But there is an upside.

You Have Almost No Competition

Most people are lazy and prefer to do nothing most of the time.

Out of the people who aren’t, most of those people are risk-averse.

That doesn’t leave a lot of people left.

Given people’s propensity to do nothing, coupled with their risk aversion, simply becoming an average risk-taker and fearing less than your average man can vault you ahead of most people.

Seriously, almost every gym bro I know (so, the opposite of lazy) has no money invested anywhere else.

Most business owners I know (also not lazy) don’t have any money invested outside of their own business.

And here’s the thing — they probably never will.

It’s a mindset, and only few have it.

Markets are down everywhere.

Standard of living is down, savings are getting hammered…

And the Do-Nothings are somehow thrilled about it.

“I knew it wasn’t the right time”, they will say.

The punchline is however, for them, it will never be the right time.

Remember, these people do nothing but make excuses.  There will never be a time for action, and certainly not once we’re at the bottom of the market.

Then once the market starts going up again, they will “wait for prices to go back down”.

A Do-Nothing’s success is capped.  Their ceiling is right above their own heads.

The only thing that will ever motivate them in the future is desperation when they realize they’re fucked.

And we all know how that ends up.

Crypto is a great example of this.

Now that the market is down, people coming out from every rock in every country, telling the world how it’s a ponzi scheme, or at the very best, unsustainable.

As soon as you ask them “how”, they’ll have nothing for you. 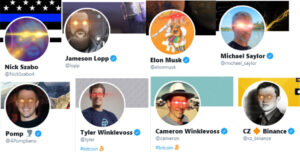 They love it when rich people with conviction lose money. They fucking LOVE it.

Now if it’s mainstream financial news saying it, that’s no surprise, just know which god they answer to.  Their god also has three letters, and is the enemy of crypto.  Not going to post it, you can figure it out.

If it’s Peter Schiff saying it, let him have his moment.  It’s temporary, and you’ve gotta admit, he’s earned it.  He was the only one saying it at the top as well.

But for a lot of other people, for once, their choice to do nothing, in their eyes at least, was justified.  And they feel great about it.

“At least I didn’t LOSE any of my money”, they will say insolently.

They finally have the chance to disguise their paralyzing fear as intelligent restraint.  Let them.

No fortune was ever made without great losses along the way (minus the 5 crypto bros who cashed out at the perfect time).

These people will never invest anything, and will never know real financial freedom.

This losing period is setting most of you up for much larger success down the road.

And many of you, now, actually know what you’re doing!  You…have…no…competition.

Just remember this, every single time you hear anyone say different.