Ichimoku Kinko Hyo is an all-in-one system for trading Forex.

But is this the best way to approach it?

Let’s learn all about Ichimoku, then take it apart, piece by piece.

What We Will NOT Cover

We don’t do things by the book here, and this is what makes us better than the rest.

We only go over things which are relevant and have a chance of making us money in the future.

So if you want to know about….

You have come to the wrong blog.

You can literally go to every other website that talks about Ichimoku and learn useless information like this.

We’re here to beat the market.

What We WILL Cover

This is a two-pronged approach.

On the No Nonsense Forex YouTube channel, I even broke it up into two videos, and will post both of them here.

We are first going to learn about the Ichimoku Kinko Hyo, and the basic strategies for trading it.

There is no purpose to going any deeper until you’ve learned the pieces and how to use it first.

If you already know how, scroll down until you see the second video titled “Ichimoku Strategy”.  This is where we’ll go over deeper strategies, and where I give my honest opinion on the pieces themselves.

We’ll move forward with the tutorial.

You may watch the video version of this, or simply continue reading on.

Ichimoku is a system of indicators.

There are 4 main pieces to it, and one of them isn’t even used my most Ichimoku traders.

See, it’s not as hard as you first thought.

Let’s break down the pieces.

You’ll hear the term “Ichimoku Cloud” thrown around a lot.  I’m pretty sure it’s just another word for the entire trading system itself, but the cloud does play a big part.

It’s formally known as the “Kumo Cloud”, but we will just refer to it as the “Cloud” here.

“The Cloud” is nothing more than the space between two lines…

Are those two lines significant on their own?  Absolutely not.

It’s the “cloud” they form.  This is what we care about.

Here are the basic rules of the cloud

I have reformed this to include one other option — if price is INSIDE the cloud, you can still take longs and shorts, but use half of the risk you normally would.

You may decide which path you take here, but regardless of which one, pick a side and stick with it. 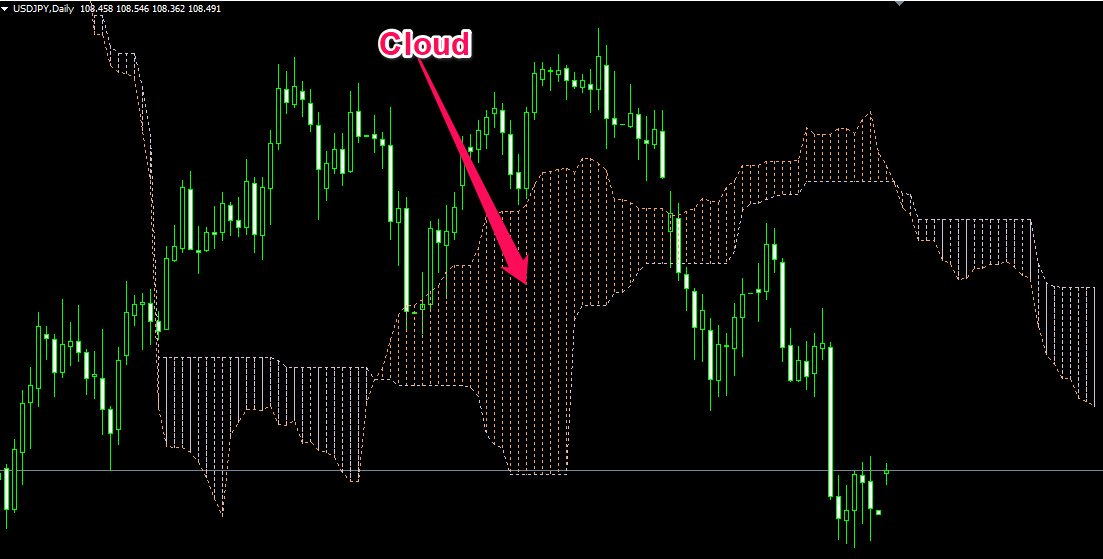 Price is clearly below the cloud right now, so only USD/JPY shorts are allowed until things change.

Got it?  Good, because we’re moving on.

The other two major parts of the Ichimoku Kinko Hyo more or less act as moving average crossovers.

I refer to them as “moving averages”, even though they are a bit more rigid then what you would normally see in a moving average, but you get the idea.  Or you will once you see it.

The Kijun Sen is the slower of the two.

At No Nonsense Forex, it will forever be Aqua colored so we can easily identify it.

This is the faster of the two “moving averages”.

We will color it in Red, now and forever.

When the Tenkan crosses the Kijun UPWARDS, you have a long trading signal

When the Tenkan crosses the Kijun DOWNWARDS, you have a short trading signal 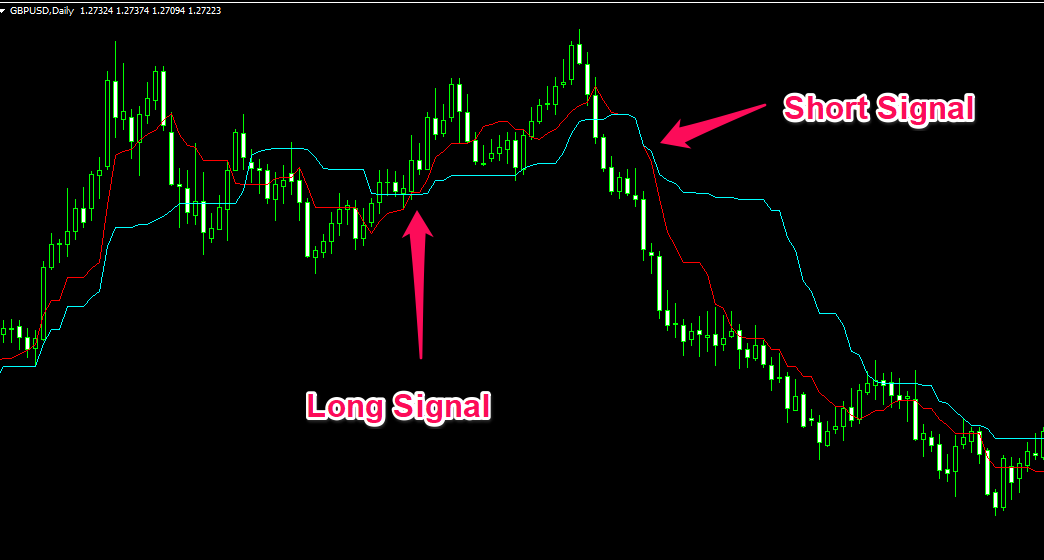 When they cross, it’s a signal.

But here’s the catch.

The cloud must come into play as well.

This system forces you to be a disciplined trader and take only the strongest trades available.

So a true Ichimoku trade would look like this: 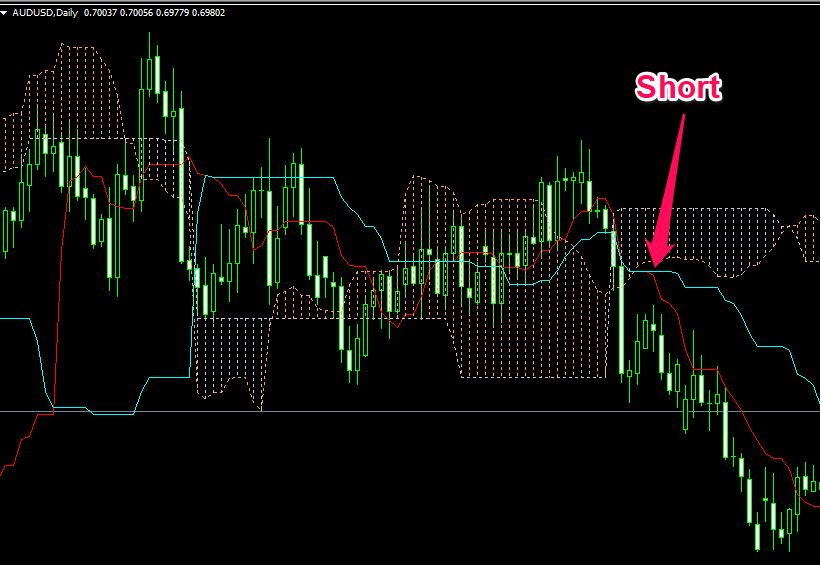 The Tankan crossed below the Kijun indicating a SHORT trade.

Price was also below the Cloud at the time, giving us the green light to take the short trade here.

It doesn’t really matter if the lines are inside the cloud or not, it’s more about where price is sitting.

In basic Ichimoku strategy, these rules must all come true before entering a trade.

And in the above chart, there were no other trades to be had beyond the one I pointed at, because not all of the criteria was ever successfully met.

And if you just stop right here, you will have more than enough information to trade Ichimoku.

You can just trade this way, do nothing else, and with the right money management do quite well.

But there is another piece to it for those who are interested.

The wild child of the bunch.  The Chikou Span is very easy to figure out.

Now connect those crumbs with a line.

This is the Chikou Span. 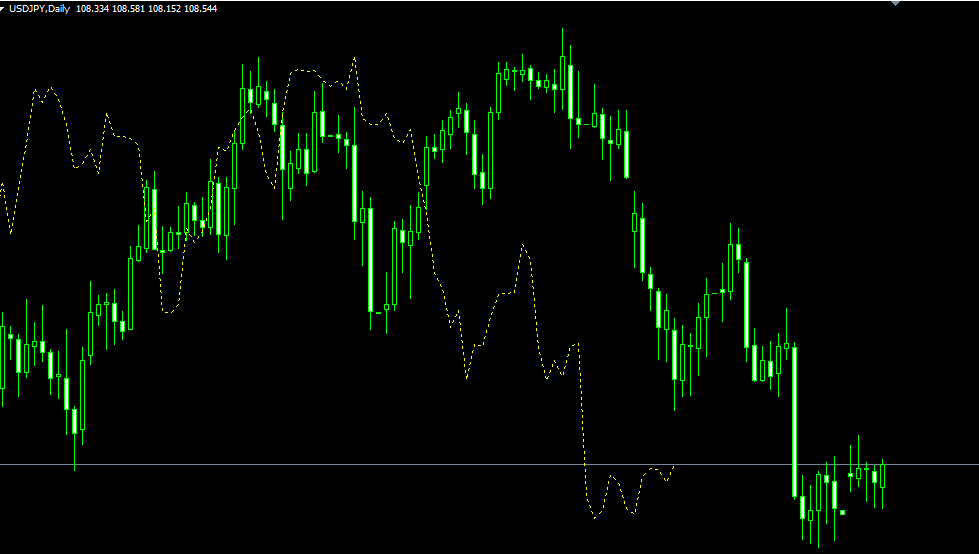 You will notice how the Chikou Span ends right at the close of the most recent candle, and 26 candles back.

The basic strategy here is to look for a trade entry first, and then look back to see if the Chikou allows it.

We already know from looking at the USD/JPY daily chart earlier, only shorts are allowed for now.

So if you wanted to go short on the USD/JPY daily chart, you would look back and see if the Chikou span was above or below price.

For shorts, you want to see it below price.

It is, so according to the Chikou Span, you are allowed to go short here.

And of course yadda yadda, you want it above price for longs.

If you are using the Chikou Span in your trading (and commit or decommit to it beforehand, no cheating here), if it’s on the wrong side, you pass on the trade.

This is an extra layer of discipline Ichimoku traders will often add to the equation.  But again, it’s optional.

Some people drill down really deep on the Chikou Span.  We do not do that here, but plenty of information is out there online if you feel the urge.

Too see if this is recommended by No Nonsense Forex, see the strategy video towards the bottom of this blog post.

As noted before, this is a great system for brand new traders, because true trading discipline is something they all lack, whether they want to admit it or not.

And it’s crucially important for success.  I made an entire video on it.

Of course you can still take liberties here that you shouldn’t, but if you stick with the rules, you have a very good chance to get much better results than any other novice trader in the game.

Discipline is that important.  Even moreso than great trade entries I think.

But trade this way for awhile, then move on.

It’s like showing somebody a basic strategy in chess.

Lots of people play chess, but how many ever took the time to learn a basic, regimented strategy?

If you took the time to learn one, and then actually abided by it, you would be able to beat just about everyone you know.

The jump is that significant.

And the same applies to Forex trading.  You now have something, and entire system, that nobody else has the patience or discipline to bother with.

But back to my chess analogy.

You can have this basic which crushes your friends and family and makes them not want to play you anymore….

But will it turn you into a ranked player?

If you want to be in elite company, and this site gets people there, you will need to go further.

In the Ichimoku Strategy video, we dive deeper to see if there any part of the Ichimoku Cloud system we can take with us, as we depart upward and onward.

And now, for the video.

If you’re new to Forex trading, you should really give this system a try.

It takes patience and discipline you probably don’t have, but if you ever want to have a chance at turning pro, you must have both of these things in spades.

May as well start now.

I wish you the best moving forward.