Very few people pay their crypto taxes, because they think the nature of what makes the blockchain the blockchain allows for hiding money and not having to report anything.

They have it backwards.  And it’s going to hit them really hard one day.

A quick note.  People request videos about taxes all the time, usually pertaining to Forex trading.  This is a bad idea for a content creator to talk about.  Everyone’s tax situation is unique, and no matter what I advise on a video like that, it could potentially steer people in the wrong direction, so it’s better off avoided.

I hate taxes the much as the next guy.

I have even gone to great lengths to legally avoid as many taxes as I can, and set myself up to receive benefits (FEIE for example), to alleviate my tax burden.

But that doesn’t mean I am dumb enough to simply not pay them, or not pay portions of them.

I didn’t become financially independent so I can be nervous and look over my shoulder all the time.

You need to pay your taxes always, and crypto is no exception.

Because your enemy in this battle, especially in the US, aint playing around. 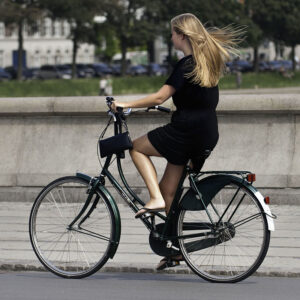 Like every ten seconds, one of these goes by.

Wholesome scenes of people getting together and swimming in the river, peacefully enjoying the comfortable northern sunshine.

Cafes bustling with happy couples and groups of friends getting together for a beer.

“Is this paradise?”, some may ask themselves.

Possibly yes, if you’re wealthy.  And for three months out of the year.

Denmark is the most expensive country I’ve ever been to by far.  And I’ve been to Switzerland, Luxembourg, and the Cayman Islands.  Denmark destroys all three of these places in terms of cost of living.

The USD is as strong against the DKK as I can ever remember seeing it.  But as soon as I settled into my hotel room, I went to the local kiosk down the street and grabbed 4 protein bars and a sugar-free Red Bull (I don’t like coffee).  188 DKK.

I did the math.  I just paid $26 for four protein bars and a Red Bull!  This is $15 in the US, and usually cheaper elsewhere.

An all-day subway ticket IIRC was about $30, I had to the do the math in my head, which is always an adventure.

I could keep going, but to add insult to injury, for some of the nicest people I’ve ever come across, Danes pay more in taxes than anyone else on the planet.

I drank with a group of Danes my last night in town, and asked how they could afford to live like this despite the extraordinary cost of living and oppressive tax rate.

One replied “We really can’t.  We just save all of our money for the Summer since it’s the only time to have fun.”

I asked what the tax dollars went to, and it was the same answer everyone else gives — “Roads, public transport, schools, medical care”.

Those schools must be amazing, because the roads were nice, but the public transport was about as average as it gets.  And most Danes are probably taking major losses overall when it comes to medical care, because most of them are so freaking healthy already.

My point is, even if your tax rate seems high and you hate paying it, just know that other places have it worse.

Two of the guys I drank with worked in banking, one guy was a younger lawyer, and they all complained about the cold and how they never have any money to spend.  One of the banker guys bragged about how he got a sweater as a gift ten years ago and it still looks nice.

The big fuss in the libertarian community over the past few weeks was how the Biden administration was hiring 87,000 new IRS employees to collect more taxes, to cover up for America’s string of bad financial decisions.

I find it strange that anyone would be upset over this.  As libertarian-minded as I can be, and as much as I hate taxes, governments do have a right to collect them, especially seeing as how so many Americans just flat out don’t pay them.

If you didn’t click the link, 57% of Americans paid no taxes in 2021, but that’s misleading.  The number you’re looking for is on the third point down, the 19%.  Those people paid no income OR payroll taxes.  That’s a lot of money just sitting there to be had.  Money that should have been paid.

Yes, some are wealthy people who give lots of money to charity, some are business owners who write a lot of stuff off, but that doesn’t account for the majority of the 19%, let’s be honest.

I can’t believe I’m saying this, but I’m on the government’s side here, fuck it.  If I have to pay them, so should you.

And if you’re doing it honestly, you should not fear an audit (for the most part).

The only thing I fear is forgetting to claim something like a crypto wallet address, since I have so many of them now with all of the Cardano stuff I’m into.

“But how would they ever find out about it?”, you may be asking.

If You Give Them Enough Time

Auditing is difficult, time consuming, and very labor intensive.  This is why so many people have sidestepped the law when it comes to taxes.

There are only so many auditors to go around, so they need to be utilized in the most needed areas.

Huge corporations, people who have gotten themselves on the radar for suspicious activity, etc.

Because it takes a long time to do.  Accountants still use the two-column system we’ve used for 700 years, and some of it is still done on paper.  Nightmarishly tedious for an auditor.

But pretty soon, with the blockchain it won’t be.

It’s all right there.  It’s all automated.  And if you wanted to, you could connect everything to everything (mostly).

You could absolutely hide money here, and get away with it, but I don’t think it would last.

Because once they get it fully automated, nothing is stopping them from going back 5 years to see if you’ve been doing things responsibly.

They know there are probably billions of dollars out there right now, during a bear market, of untaxed crypto just in the US.

You don’t think they’re going to find a way to get to it eventually?

They’re already doing it!  And they barely have the resources they need yet.

Bet against my theory at your own risk.

You may think you have the tech know-how to sit there and say “There’s no way they’ll be able to find x, y, z…”.

Just know, there are people smarter than you out there who could find a way.  And governments will pay them handsomely to figure it out.

CBDCs Will Make It Easier

People are concerned about their government’s power over our money via the use of Central Bank Digital Currencies.

It’s a legitimate fear.  But I will say this much at least — it’s going to take some time to implement.

But if social credit systems do become the norm someday, which I do expect (again, not for awhile, but someday), getting flagged for not paying taxes, regardless of when it was, is likely going to hinder what you can and cannot do until you’re paid in full.

And even then, simply having the audacity to not pay in full all the time could put you on a list that restricts you from certain things.

Don’t ever bet against governments when it comes to accessing all of the power they think they can use.

All of these people who think they’re going to be able to use blockchain for all payments all the time, go completely bankless, and evade taxes are in for a very rude awakening.  Maybe not now, but it’s only a matter of time.

I was not too happy with the software I used, but I won’t put it on blast because that’s not cool, I was just not happy with the ease of use, your experiences may differ.  Just run a search for crypto tax software and pick one.

But it works similar to the file you send your accountant that tallies up all of your Forex trades, your stock portfolio, etc.

There’s a small chance anyone from the government is going to go in there and look at your trades, but the main point here is they could if they wanted to.

And like I said before, auditing will have become very easy the more things are done on the blockchain, so never rule it out.

Best thing to do is to stay off of their radar and just pay what you have to pay.

With all of my bank accounts and foreign corporations and stuff, I am probably a prime candidate for an audit, but it has yet to happen, mainly because I’m compliant and I pay my required taxes in full.

It’s just a part of life.

I met a digital nomad who said “Shit, I pray that someday I’ll have to pay a million dollars in taxes, are you kidding me?”

But this includes crypto too.

There may even come a time where the compliant get F’ed, just like the exchanges that complied are getting F’ed right now.

But play the long game.  The IRS’s shit list is not a list you ever want to be on.

Win by not losing.