Crypto.com inked a 175 million dollar deal with the UFC.

It was worth twice that.

I’ll lay out my case.

I was aware of the deal when it struck about a week ago.  I wanted to see what it looked like with my own eyes, instead of reading the deal and visualizing it in my head.

So I bought the UFC 264 Pay-Per View with the intent of seeing just how much exposure Crypto.com is getting, since the specific terms of the deal have not yet been released.  It was also a great card and I wanted to see it.

I waited for the buy numbers to come in before writing this, and UFC 264 was the second largest event on record with over 1.8 million pay-per-view buys.  This isn’t the big number though, stay tuned for that.

If UFC 264 was any indication, Crypto.com is getting even more for their money than I once thought.

Let’s take a look at the deal itself.  If I’m seeing this correctly…. 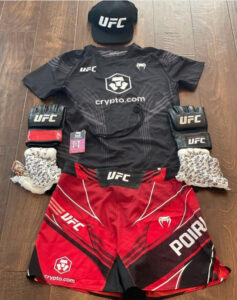 This level of exposure cannot be taken for granted.  And it wasn’t a suffocating amount of exposure either to where people are going to grow tired of it in a hurry IMO.  Very clean, not super in-your-face, but no doubt the main sponsor of the UFC now.

Do you know what Crypto.com does?  It’s not really a website.

Crypto.com is a trading platform, a wallet, a credit card service, a staking platform, pretty much an overall banking system on the blockchain.

You do all of it from your phone.

I am a customer (I have no affiliation), and I can say I’m a very happy one.  They really do things right.  Great security, tons of options, and I can top off my credit card with ease.

I am living overseas, and all I had to do was turn my card’s international switch to “on”, and I can use it anywhere in the world with ease and no added fees.  This has not been the case with my other cards, even though my bank told me there was no need to alert to them to international use.

They have an attractive tier system where you can go check out their different cards.  Depending on which card you get, you receive “cash back” in the form of their CRO crypto token.  This is the one part I do not love.  I will say however, I am very bullish on the CRO token now, especially after this.

I have the indigo colored card.  Back when I got it, the staking requirements were a lot less, only $2500 in fact.  Let this be a lesson.  If this is something you want, get it now.  They only make it more difficult, and something tells me, a lot more people are going to start wanting one. 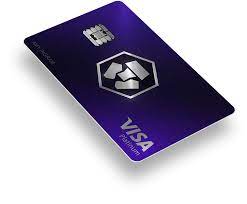 But the benefits are great.  I don’t even watch Netflix, but that membership is “free”, as to where I get it back in CRO token, so it’s like a savings account.  Free Spotify, same type of deal.  Prime was included back then, so that’s free as well.

I have used the lounge pass several times already, and anyone who knows about airport lounges knows just how valuable they are.  This is madness too, it usually costs $30+ for access per session, but it’s totally free just for possessing the card.

If you can’t swing the mid tier cards, don’t despair.  The 1%-2% CRO rewards alone make the other cards worth having, especially if CRO goes up (and if you believe BTC and ETH are going up, CRO is likely going with them), this is a great way to stack just by buying the things you already buy.

I’ll take that over an airline miles card that take years to become anything worthwhile, or fiat cash back cards.

I barely use the other features, but they are impressive, and lots of people out there are already using Crypto.com as an all-in-one solution.  Suffice to say even more will come now thanks to the UFC.

Crypto.com already has deal with F1 Racing and the Montreal Canadiens, but the UFC is their biggest signing to date.

The UFC is Big

Let’s take the Pay-Per-View event last weekend, UFC 264.  Again, 1.8 million PPV buys.  It was a Conor McGregor fight, and those always draw more than others, but again, this is just one event on one night.

You may think 2 million isn’t that big, the NBA gets four times that for a playoff game.  Well first of all, watching the NBA is free, but you’re missing one incredibly big factor — the YouTube videos.

Two weeks prior, the UFC released the second meeting between Conor McGregor vs Dustin Poirier on their YouTube channel for free.

This fight happened almost 6 months ago.

Everybody already knew who won.

15 million people watched it.  In a span of two weeks, a fight that happened back in January, got 15 million views.

The day after the fight, UFC released another YouTube video showing the McGregor post-fight interview, and it’s already almost up to 5 million views!

You could not see the crypto.com logo on this one unfortunately, but chances are you are going to in the vast majority of UFC YouTube videos released from here on out.

Mega exposure.  For the next ten years.  I can say with certainty, this is going to feel like a raw deal for the UFC 4-5 years down the road.  They could have gotten more.

You can only get the Crypto.com card in a handful of countries, but there is no doubt they will be expanding, and the UFC platform is the greatest place to do this.  You want things on the way up, and the international exposure of the UFC is trending vertically.

It used to be ruled by Americans and Brazilians only, but not anymore.  Let’s take a look at the current UFC champions, and where they’re from:

Apart from eSports, nothing is expanding on a global scale like the UFC.  They want to take over, as do their sponsors.  Unfortunately, there are still far too many US-centric sponsors in their family (can anyone in Europe even use DraftKings, or buy Nemiroff Vodka?).  Crypto.com will certainly not let this global opportunity go to waste.

Let’s Compare This To The Super Bowl

Let’s compare this to what I think is the shittiest deal in advertising next to banner ads.

This actually dropped to 5.5 million in 2021, because companies were starting to realize what a crap deal it is.

Super Bowl commercials used to be by-in-large very entertaining, and often memorable.  Some of the slogans used to be parroted for years afterwards.  Not anymore.

Modern-day Super Bowl ads are geared towards women and gay men (lots of gay dudes watch the Super Bowl, and often for the commercials).  Makes sense too, straight men usually get up to go pee or get something to eat or drink during this time.

This is why the most Super Bowl ad spend in 2020 went to Tide detergent, with that stupid reoccurring Charlie Day ad.

Needless to say, the golden era of super bowl commercials has come and gone.

This is what you call a glorious waste of ad spend, despite what Gary Vee might say to the contrary.  He thinks the Super Bowl is the last great deal left in TV advertising.

NFL games are copyrighted, so you will not see this commercial again unless you’re doing a piece like I am and you searched for it.

It’s gone forever.  A one-use ad spend.  I’ll be kind and say it was only a three-part commercial sequence, so 3 x 5.5 is 16.5 million dollars.  For a shit commercial that barely anyone remembers.

For just over ten times that figure, here’s what Crypto.com gets (unless I’m not seeing it right):

Steal, steal, incredible steal.  Even if I’m wrong, and the cage guard, mat, and announcer promos were just a part of the last PPV and never to be seen again, this is a smoking deal.

This is great not just for Crypto.com and current CRO token holders.  This is great for cryptocurrencies in general.

There is no better way to obtain mass adoption than to be entrenched into the everyday society of humans and what they do.

Speaking of eSports, FTX inked a deal here not long ago.  This was an even bigger deal than what Crypto.com just did.

eSports and UFC both have young, growing, and increasingly international audiences.

The plan is set in motion.  And if you think there’s not so much more to come, you’re crazy.

How To Profit From It

I think all crypto investors will benefit from things like this, but let’s focus in on the CRO token for just a moment.

It did not see a significant rise during this past week, though it’s rare that these tokens do rise after these deals are struck.

But I am a long term buy-and-hold guy when it comes to crypto, and the long-term benefit here are fantastic IMO.

So how do you get your hands on some CRO?  It’s not easy if you want to do this outside the Crypto.com ecosystem.  You really need to get one of the cards.

The blue one is free.  I can attest to the fact that it’s a great experience to use on an everyday basis, the cards look great, the Crypto.com ecosystem is wonderfully intuitive, and you get free CRO just by using the card.

One piece of advice which will save you a lot of headache is to deposit money into your Crypto.com fiat wallet only, nowhere else.  Then you can later distribute the money wherever you’d like.  A lot of people, myself included, had issues with this starting out, and this is where a lot of online complaints stem from.  But once you figure it out, it’s all gravy.

If you are considering a higher tier, like I said earlier, don’t waste time.  The staking amounts are only going to go up from here.

We’re in a lull when it comes to the overall price in cryptocurrencies.  The smart money is making moves.

What are you doing?